The State of Steel January 2023

Pricing - Have we hit the bottom on steel pricing?

Steel pricing seems to have leveled off in recent weeks as pricing begins to stabilize, and high-cost inventories get depleted. We are still seeing a large price gap between mechanical tubing and structural tubing, but it appears that the gap is shortening a little due to structural prices increasing and mechanical prices slightly decreasing.

While structural tube pricing had been in a freefall, mechanical tube pricing remains elevated and lead times stretch out beyond 1st quarter of 2023. Due to availability constraints and limited producers, pricing looks to remain somewhat elevated. Most DOM, HRS, and CDS prices are remaining flat and have been for months.  Contract pricing has seen several increases due to continued inflationary pressures and the necessity to assure the sustainability of the individual mills. No DOM Scrap Surcharge for the month of January 2023. DOM Fuel Surcharges remain at 48% for the month of January. Effective Jan.1st, 2023 CRU Index pricing will increase by $100/ton.

The CRU index came in at $712/ton this week. Last week it was $692/ton.  Week-over-week change is $20/ton. Looks like HRC is on a slow climb back up. We have now seen CRU increases in 2 straight weeks which could indicate that pricing is beginning to stabilize and begin an upward trajectory. Nucor just announced a $50/ton price hike effective January 9th, 2023. This is on the back of a $60/ton increase announced last month. The below charts reflect the CRU index and a current listing of all price increases/decreases on tubing that we have seen within the last year or so.

December did not see any base increases for cast iron. Dura-Bar’s base price has remained constant since April 1st of 2022. Surcharges appear to have hit bottom after 7 months in a row of decreases. January saw a small increase in all grades of cast iron. The above chart details the Dura-Bar surcharges over the last year or so.

Nucor rolled its first steel plate this week at its new plate mill in Brandenburg, Kentucky. The mill can produce 97% of plate products consumed domestically and is centrally located in the country's largest steel plate-consuming region. (Source: SMU)

DOM Tubing lead times continue to be long but have shortened slightly and are now anywhere from 12 to 20 weeks. HRS and CDS tubing are substantially longer due to a lack of steel tube hollows and a short supply of raw materials. The long lead times are due to backlog, supply issues, contract business, and labor shortages.

Structural Tubing mill lead times are shortened and run approximately 2-4 weeks upon receipt of the order. Common sizes we can get sooner for now.

Dura-Bar Continuous Cast Iron mill lead times are approximately 4-6 weeks depending on size, grade, and finish. If it’s a large bar, special grade, size, or shape then the lead time could be considerably longer.

December imports seem to have remained below the median. Expectations are that imports will remain lower than historically due to many factors such as supply, geopolitical and individual country needs.

December’s manufacturing PMI fell to 48.4%, down from 49% in November, and the lowest level since May 2020 when the pandemic recovery began. (Source: SMU)

Sales of previously owned homes declined 7.7% in November from the prior month to a seasonally adjusted annual rate of 4.09 million. November sales were down 35.4% year-over-year. This also marks the tenth consecutive monthly decline in home sales, which is the longest streak of declines since 1999. (Source: Wall Street Journal)

USW members voted overwhelmingly in favor of ratifying the terms of a new, four-year collective bargaining agreement with US Steel. (Source: SMU) 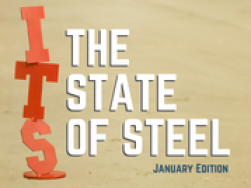 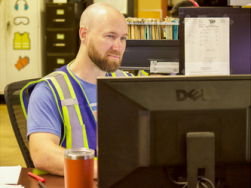 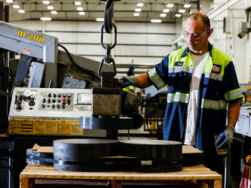 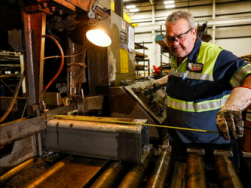