The State of Steel October 2022

Steel tube pricing continues to be conflicting and confusing. Structural tubing prices continue to decline amid weaker demand and oversupply in the marketplace. In recent months, several new mills have gone online, and another mill will be moving to be online in the next few months. This combined with the lowered demand from end users are the main culprits for steel price declines.

While structural tube pricing declines, mechanical tubing pricing remains elevated and lead times continue to be very long. Most DOM and CDS mills have just opened their order books in mid-September. Mechanical tubing (DOM, HRS, CDS) mills are struggling to keep up with demand due to labor shortages, robust demand, and a limited supply of tube hollows and bar. Because of these factors, the pricing looks to remain elevated still for the foreseeable future. Most lead times for hot rolled seamless, cold drawn seamless, and drawn over mandrel tubing are well into the beginning to the middle of next year!

CRU came in at $769/ton this week. Last week it was $791/ton. Week-over-week change is -$22/ton. Looks like HRC is back on a downward trend with back-to-back week losses. The below charts reflect the CRU index and a current listing of all price increases/decreases on tubing that we have seen within the last year or so. 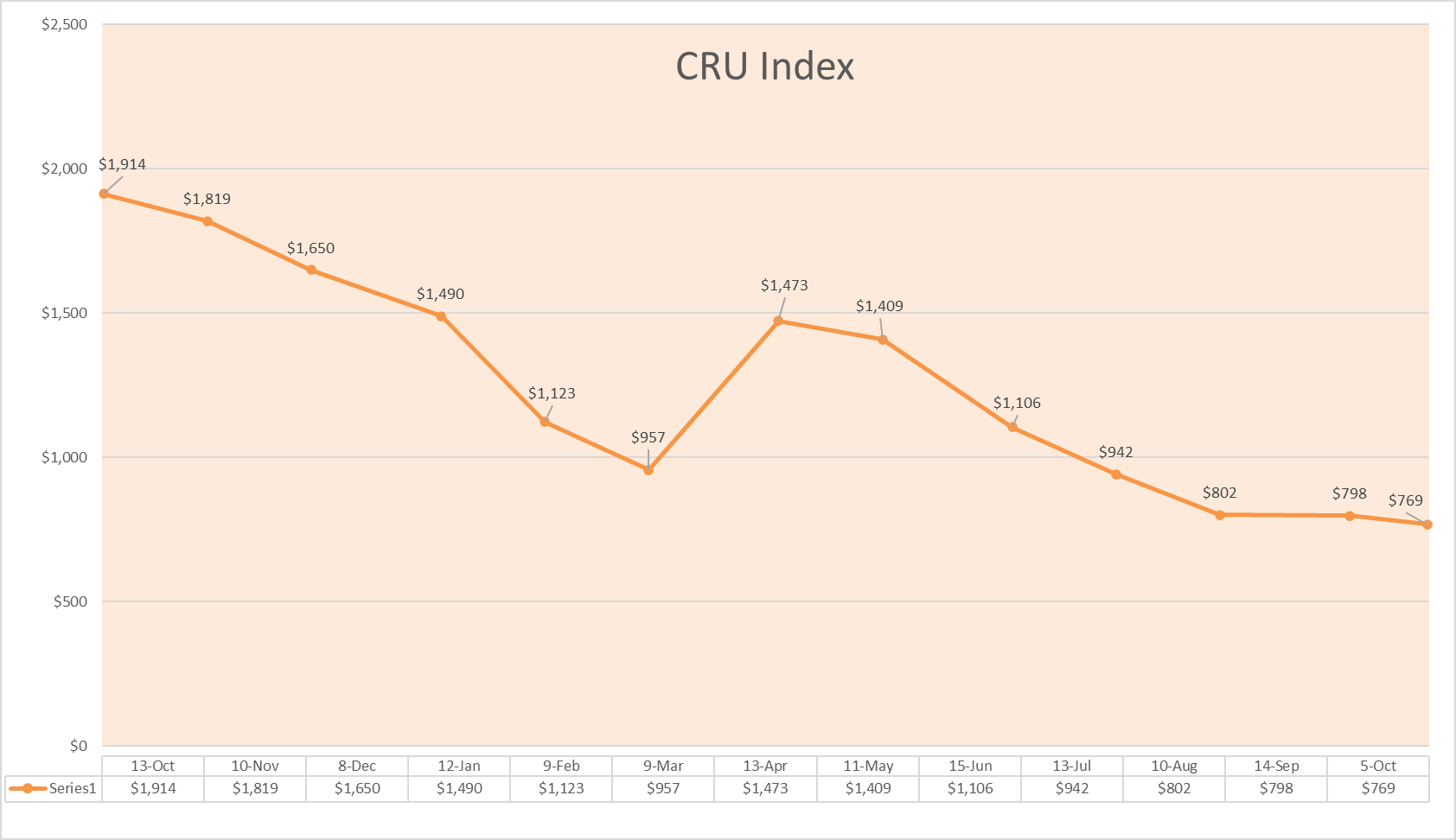 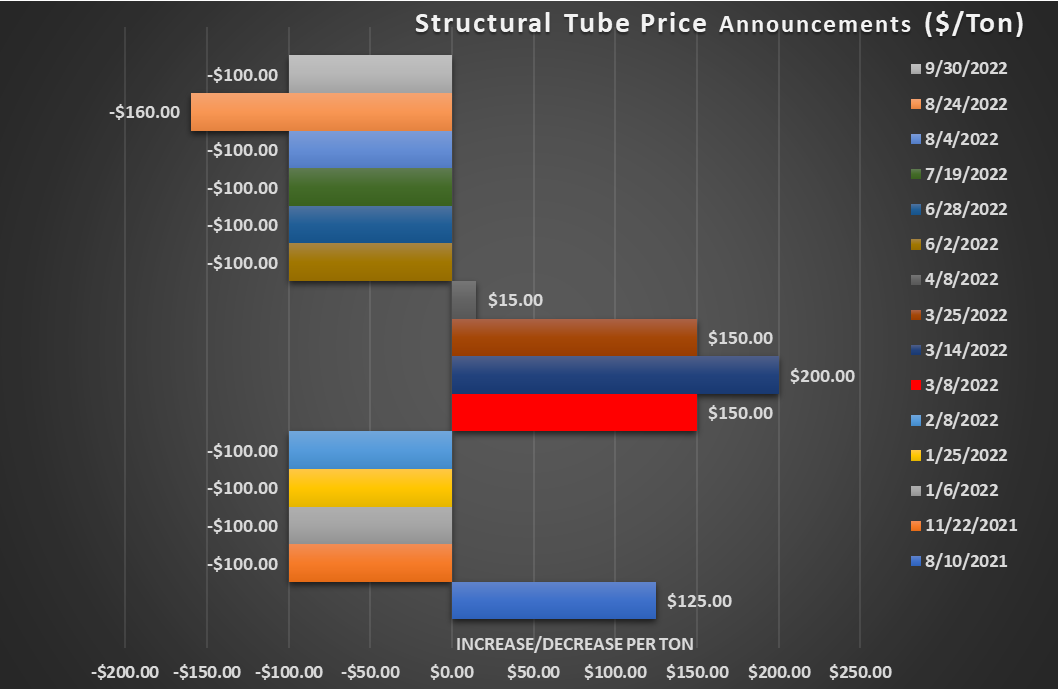 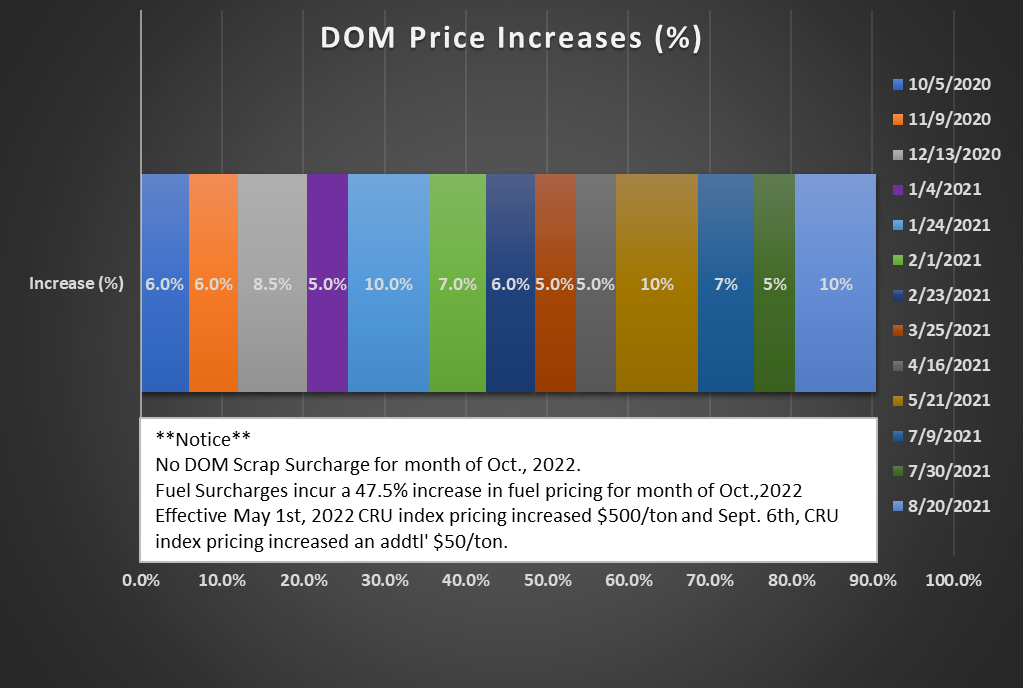 October did not see any base increases for cast iron. Since January 2021, Dura-Bar has increased their base prices a total of 4 times. Surcharges appear to have topped out in May as we have now seen surcharge decreases four months in a row. Dura-Bar appears to have leveled off on the surcharge and should remain stable for the foreseeable future. The below chart details the Dura-Bar surcharges over the last year or so. 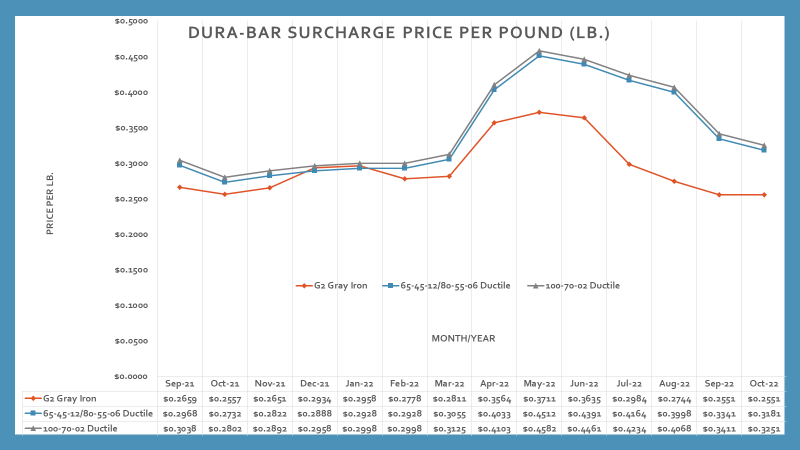 Ahead of the October scrap buy week, market sources expect obsolete grades to decline by $20/ton or more from September levels, while prime scrap is expected to be flat to down slightly. If accurate, it would mark the 6th consecutive monthly decline in scrap prices. (Source: Platts)

DOM, HRS, and CDS Tubing lead times continue to be long but have shortened slightly and are now anywhere from 24 to 36 weeks. The long lead times are due to backlog, supply issues, contract business, and labor shortages. We continue to see lead times be long and are now seeing availability not free up until mid-2023.

Structural Tubing mill lead times are steady and running approximately 3-5 weeks upon receipt of order. Common sizes we can get sooner for now.

Dura-Bar Continuous Cast Iron mill lead times are approximately 6-10 weeks depending on size, grade, and finish. If it’s a large bar, special grade, size, or shape then the lead time could be considerably longer 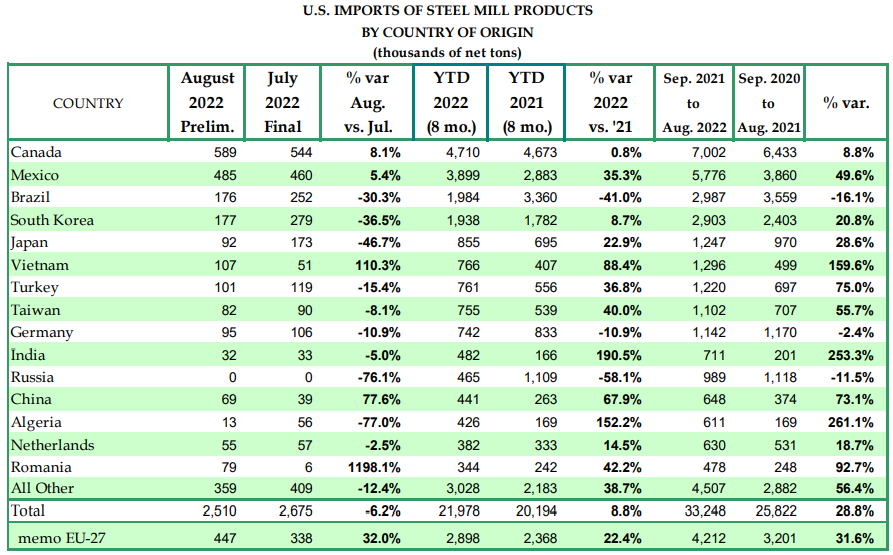 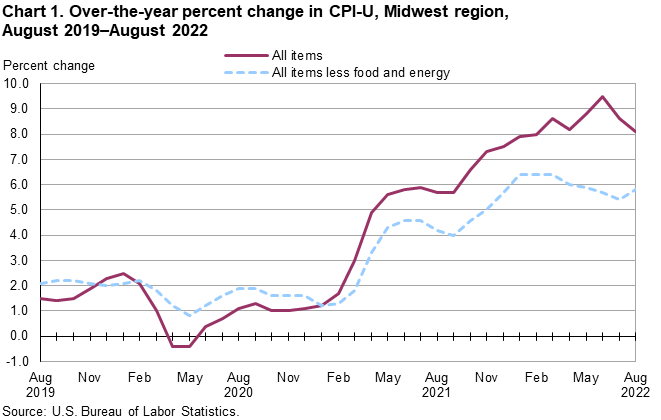 The US rig count increased 0.4% week-over-week to 765 rigs as of 8/26. The rig count is up 50.6% year-over-year. (Source: Baker Hughes) OPEC said Monday it would reduce oil production next month, the cartel's first output cut since the depths of the pandemic, as it braces for a global economic slowdown to hit demand. (Source: CNN Business)

US Steel has decided to indefinitely idle the #3 blast furnace at its Mon Valley Works. This means that US Steel is currently operating only 5 of its 8 active blast furnaces (Source: SMU). ArcelorMittal announced that its crude steel production in Europe in 4Q2022 will be down year-over-year by 1.5 million tons, or 17%. ArcelorMittal is in talks to furlough part of its Spanish workforce as Europe’s energy crisis hobbles demand. Europe’s energy crisis is forcing the continent’s metal producers to slash production, as costs rise and demand from key consumers drops. While steelmakers have been less affected than producers of more power-intensive metals like aluminum and zinc, they have already been forced to idle about 10% of their capacity, according to Jefferies. (Source: Bloomberg)